Having the opportunity to paint in the “open air” with my plein air group is something I relish on Sundays.  That’s just the beginning.  inevitably I almost always have the equal benefit of meeting new people and learning things.  Nature has a habit of drawing interesting folks to it and I get a glimpse at times of our common bond as human beings.

Sunday I was at a place called Baldpate Mountain in Titusville NJ.  It’s a rich terrain of hiking trails for walking, running and horse back riding. It was a cool fall morning with lots of color and awesome vistas for a painter.  I found a nice spot at the lower part of the mountain near a parking area where I had a  view looking up toward the mountain and a house on the site.

About an hour into my painting a lively gentleman with a walking stick came up to see what I was doing and started chatting away about the mountain, the trails and why he was there.  Outside of his love for nature I learned he was there to do some “geo tracking”.  Around his neck was a high-tech device that allowed him to find coordinates and search for “hidden treasure” which apparently there was a lot of in this location.  He continued to share with me some of the details surrounding “geo tracking” and how he could follow and observe the things he had left at various locations on a website http://www.geotracking.com.

I learned the walking stick he had been one of the “finds” from an adventure.  It was a beautiful blonde wood stick with a tracking number carved in the side.  This gentleman had added his own artwork to it in honor of the previous carrier.  I could see the time and care this took and sensed the respect toward his fellow traveler who although sight unseen, he knew on some level.

It was fascinating and intriguing to listen to him.  What struck me was his enthusiasm, passion and respect.  It was much like mine with regard to painting  in the open air.   I connected with that and learned. I felt sparked by curiosity. After all who doesn’t love a treasure hunt?

Although we were individuals on seemingly “separate” paths that day, in reality there was a common journey going on.  There was a unified respect for nature and the need to experience adventure and discovery.   This is what infuses me with life and enriches my process as a painter. 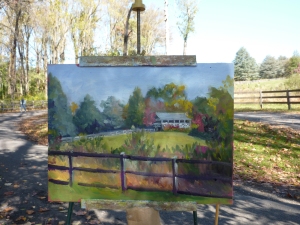 Who knows…. maybe I’ll work on some miniature paintings and leave them along a trail somewhere for future discovery!

One thought on “Plein Air Adventures”